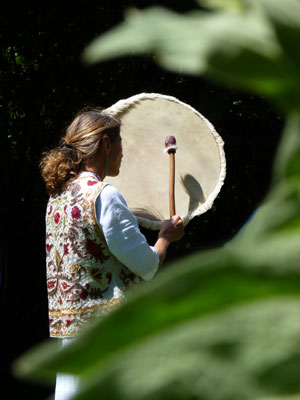 Man can recreate his lost connection with nature through lived spirituality. In order to do that we have to undo the self inflicted separation of the worlds and unify the realities.

In my search for meaning (concerning my own existence as well as life in general) I have learned from various teachers and teachings – from books, seminars, through discussions. The core of all these teachings is the arrival in the so called here and now and to live in connection with creation. I have tried out different ancient and new techniques and exercises for myself. I kept many and have changed some of these, and some new I have researched for myself. The result is the collection of the Tools for Change.

I owe a lot to shamanism. A shaman can enter intentionally a different state of consciousness in order to get in touch with realities which are normally hidden. The word shaman can be traced back to the root of the Tungusic word “sam”  which means something like to know or to be able to, respectively trance or distortion. They are mediators between the worlds, the nonordinary reality and the ordinary reality. From the nonordinary reality or transcendent world they receive knowledge, power and help for others. They create every step of their life in accordance with the original life forces.

Shamans have always known that we dream our world into existence. We have forgotten this because we have only been conditioned to perceive a selective part of reality. When we expand our consciousness we can become again conscious creators of our reality – this can be achieved with the help of Tools for Change.

In the West in the 70s of the last century shamanism has experienced a revival largely due to the books of Carlos Castaneda. Michael Harner, the founder of the Foundation for Shamanic Studies, formulated in the 80s of the last century the universal core of shamanic practices as the so-called core-shamanism. From here further schools and strands have developed. One of these, TAOB from Carlo Zumstein, has inspired me profoundly. By now more and more shamans from different countries transmit their knowledge to people in the West and thus allow access to long forgotten knowledge. In this way I was introduced to sacred plants by Alba Maria and Dhan Ribero, and thanks to Naomi Lewis and Kate Shela I learned to walk the path of the gynocentric shamanic tradition (Path of Pollen).

An essential activity of the shaman was always healing. It is considered to be the oldest knowledge of healing which was orally transmitted among the indigenous tribes over thousands of years from generation to generation. Already 40 000 years ago we find shamanic petroglyphs. For me also healing is something spiritually alive. During my work with humans, animals, plants, places and deceased souls I have changed old healing rituals and developed new ones.