General background
Nasal Specific is a method of treatment mostly unknown in Europe, though widely used in the USA and Canada. Once experienced its therapeutic effects and the significant changes it can bring, it is difficult to believe that it is not more widespread in Europe. It was developed by Dr. Richard Stober, a teacher at the Western States Chiropractic College in Portland/Oregon in the 1940s.

Nasal Specific as an osteopathic treatment
The Nasal Specific Technic is a development coming out of osteopathic treatment. Through osteopathic manipulation of cranium, the bones of the skull can be moved. Our skull isn’t one solid bone. The single bones and cranial plates of the skull move in a natural rhythm (1/4 mm). They contain blood vessels, nerves and connective tissue.
Most body functions depend on the integrity of the bone structure, the bone skins and the unhindered flow of the nerves, the blood and the cerebrospinal fluid.

What happens in the treatment 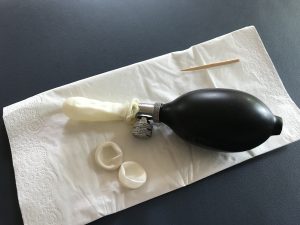 With Nasal Specific the skull bones are influenced by a blown up finger cot which is attached to the balloon of a blood pressure meter. The deflated finger cot (covered with gel) is inserted into each of the (6) nasal passages in succession: first the lower, then the middle, then the upper ones, and at the end the lower ones for a second time. In the nasal passage the finger cot is inflated for a short moment (1-3 seconds) while the patient, after a long deep in-breath, is holding the breath. The inflated finger cot presses against the nasal passage, causing accumulated mucous to flow off. It extends further into the upper pharynx where it touches lightly the tissue right in front of the sphenoid bone, causing the sphenoid bone to shift slightly. The minimal movement of the sphenoid bone causes the other cranial bones to move and to adjust themselves, and stimulates the pituitary gland and the hypothalamus.

Due to the adjustment of the skull bones and the activation of the pituitary gland and the hypothalamus Nasal Specific stimulates the body to rehabilitate its optimal function. Accumulated pressure in the joints and skins of the skull gets released and the vessels of the cerebrospinal fluid and the blood are freed, so that the primary breath can happen unhindered.

What it can be used for
The method of Nasal Specific compared to normal craniosacral treatment is up to 16 times more effective. The incredible effect is based on the fact that with Nasal Specific the sphenoid bone – the only skull bone which is joined by all other bones of the skull – and the pituitary gland as well as the hypothalamus are activated.

Thus it is not surprising that the list of conditions for which Nasal Specific has been used is long:

If this isn’t enough for you there is a longer, more detailed alphabetical list.

Here is the website with all European practitioners like myself who have been trained by André Saine.