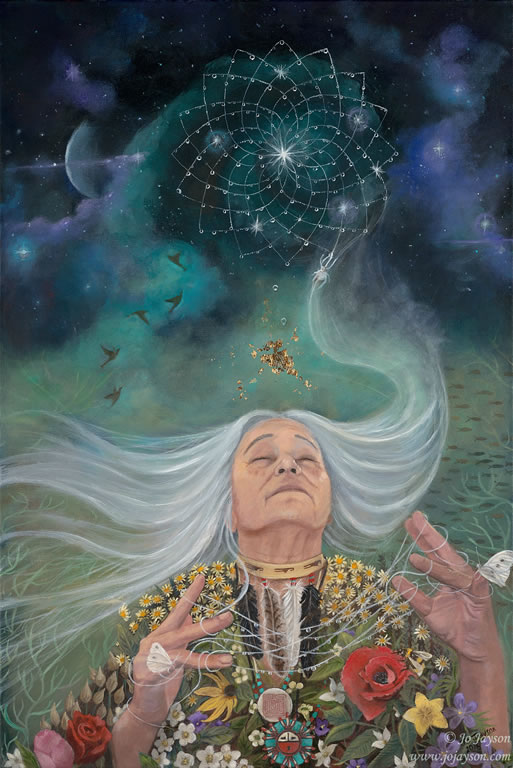 Venus starts her ascend from the underworld on 19th September, a few days before the equinox. She then will be visible again as evening star.

The current Venus cycle has been confronting us will all areas where we are not living in balanced and equal relationships – inside as well as outside. During the time of Inanna’s descend into the underworld (Venus visible as morning star) and while she was in the underworld, we were able to actively look at our own wounds regarding relationships. With each gate and while hanging on the hook we were able to let go of our automatic programs and what doesn’t serve us anymore. So that now, with Venus as evening star and Inanna returning through the gates, we can step into the world healed and strengthened.

From November 2018 till now many had to deal with and look at and work around the issue of their own parents. Those periods and moments of our early childhood where we had been neglected, had not been recognised or had been abused, came to the surface and the medicine was and is to develop compassion for ourselves and to actively dismiss our parents from their roles. We can learn and feel that we are children of the Great Mother and we that we also have the tools to be parents for ourselves.

Another issue of this Venus cycle was and is the healing of the relationship between men and women (this was intensified by the Mars Venus conjunction in the underworld over the summer). We are asked to recognise where in us and where in our ancestral line violence and separation between the feminine and masculine has taken place, where one side is dominating and where one is less developed.

Above all we are confronted with the big wound we humans have been living with for centuries: the loss of the connection we have with all living beings and the earth and the cosmos. We have to face the consequences this loss has brought with it: deepest loneliness and fear that causes control, domineering, destruction – inside ourselves as well as outside of us.

During Inanna‘s ascend from the underworld over the next months we can annihilate this separation once and for all, we can re-feel and strengthen our connection with the creation, which automatically will heal our relationships with other people as well.

We can stop the ongoing cycle of destruction, neglect and separation from us, from others and from the Earth if we connect more deeply and intimate into ourselves, to others and to the Earth and the Sky. In re-establishing these connections we will find strength and power, joy and vitality.

Inanna / Venus returns from the underworld