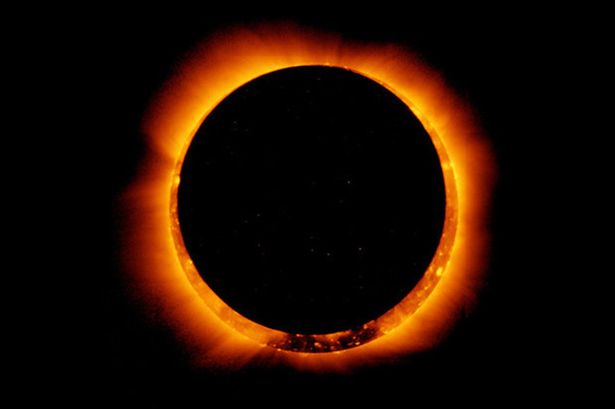 Allgemein Nicoline Eicke22. December 201922. December 2019No Comments on New Moon- annual solar eclipse
Next new moon is 26th December, 5.12 am UTC
It is also an annual solar eclipse, i.e. the moon doesn’t block out the sun completely but leaves a ring a fire at the edge (visible in Saudi Arabia, India, Sumatra, Borneo). The ring of fire reminds of a cauldron of fire, An alchemical pot, in which all must be burned Before something new can be birthed.
We enter the new eclipse season just a few days after the solstice (planting the new seed of light for the new solar year) and on the first Rauhnacht (night/day of Christmas). And the lunar eclipse following it on 10th January happens just a few days after the end of the 12 Christmas nights or so called Rauhnächte, and 2 days before the start of the new Saturn Pluto cycle. And just 2 days after the eclipse Venus/Inanna steps through another gate on her way out of the underworld.
The point is:  the time between the years (as the Germans say) this time is incredibly significant and powerful.
Moon and Sun 4.06 Capricorn
Conjunct Jupiter (5.20 Capricorn), trine Uranus (2.45 rx Taurus), square Chiron (1.30 Aries), conjunct fixed star Pollis
All in all it is a great eclipse. Especially if one likes expansion and change.
It is a great time to plant seeds for new structures, new endeavours, new businesses, new studies, new ways of experiencing life, for leaving the comfort zone, for more freedom, more unconventionality, for expanding one’s knowledge and deep understanding of spiritual matters and of oneself, for increasing one’s intuition and self-awareness, for truthfulness, for working with old wounds that flare up and using the ring of fire to burn away, thus releasing old grudges.
Whatever seed we plant now, this new moon being an eclipse lasts till June. I recommend to use it and to jump full of levity and joy into the new creation(s) in our life, daring to work with unfinished painful businesses around themes of asserting oneself, daring, being courageous, bold, initiative and wild.
image credit: NASA (GETTY)
New Moon- annual solar eclipse