This year ends with an astrological fanfare. The December was not only marked by the lunar and solar eclipse but there will also be a rare winter solstice with energies reaching far into 2021 and beyond.
Saturn is moving from one of his sings into the next, from Capricorn into Aquarius, on 17th December (staying there until March 2023). Jupiter is entering the Saturn ruled sign Aquarius on 19th December (staying there until December 2021). The Sun is entering the Saturn ruled sign Capricorn on 21st December at 1.04pm UT – on the northern hemisphere winter solstice, longest night, shortest day. Only a few hours later, 6.21pm UT, there is the conjunction of Jupiter and Saturn in Aquarius (0°29′) which is the begin of another 20-year lasting cycle. On 22nd December the conjunction of Lilith and Uranus (next to Saturn ruler of Aquarius) takes place (6°56′ Taurus).

The days now are getting shorter and the darkness increases. The time is deep and heavy, “deeper than day can comprehend”, and this year with all the regulation, restriction it feels even heavier than normally. This time of the year is always asking for stillness, slowing down, stopping, introspection. A good muck out, letting old habits go and be transformed. Preparing ourselves for the rebirth of the light, making space for the new we don’t know yet. This year it is not just about the new personal light but also a collective new. 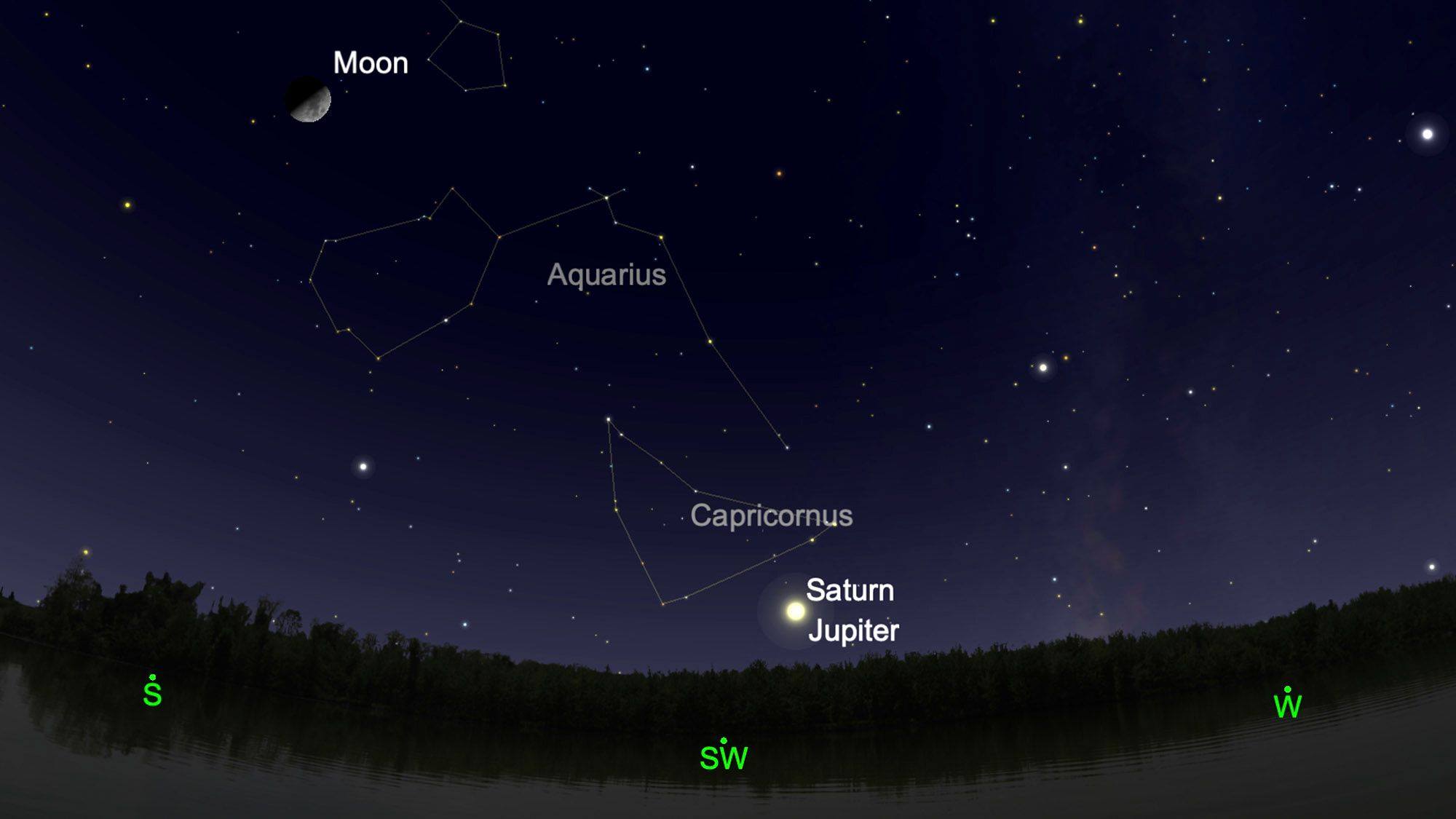 There is lot of talk that with the Jupiter-Saturn conjunction in Aquarius all will get better, that the gloomy Saturn years will be over. But it won’t be that quick because also Aquarius is ruled by Saturn. Jupiter is going to have idealistic visions of freedom and co-existence but it is Saturn who has more strength in Aquarius, not him.

Saturn preserves, conserves and as Aquarius also is a fixed, conservative sign, our world will continue to be characterised by Saturn for a while. We will have to deal with the creation of boundaries and not just the expansion of them.  Yet, amongst the establishment of new borders we will be able to expand the boundaries as well – hopefully in a responsible way, though I assume that with Mars-Uranus in square to Jupiter-Saturn in the beginning of 2021 there will be rebellious riots.

For the maths freaks:
There is a Saturn-Jupiter conjunction about every 20 years and every 60 year it falls on nearly the same place than 60 years before. Because it sin’t exact but nearly the conjunctions move slowly forward in the zodiac and changing the element (sometimes there is an overlap, already new element begins while 20 years later the old only finishes). The conjunctions take place in the same element for 200 years, and every 575 to 675 years in the same sign.

For the stargazers:
The conjunction of Saturn and Jupiter on the 21st December will be visible as they are very close to the Earth. You can already see them close to each other, though Jupiter clearly outshines Saturn. Last time, they were that visible was 1226.

Saturn is often described as the great malefic. Yet he is not per se, if one know how to deal with his energies. We all want and yearn for a new world. To build it in unison with Saturn we firstly have to be fully responsible. And we have to make sure that all is sustainable, the first new acts will be a good solid foundation. Pluto will enter Aquarius in 2023/34 – at the latest then the new structures will intensely be tested and transformed. For this to be less painful it is wise to now start slowly and responsibly – in ourselves, creating new structures for freedom, equality and fraternity. Saturn in Aquarius wants responsible implementation of those airy concepts of freedom, equality and fraternity.

We can only manifest them in the world when we have manifested them inside of us.  We have to ask ourselves first how we understand these concepts. What does freedom, equality, fraternity mean for oneself? And then we have to, consciously and with our intention, put them into practice, before we will live in such a world collectively. The steps of Saturn are slowly and persistently. So let us take our jupitarian ideas and give them a saturnal structure.

2020 was a yer with many changes and the world we once knew is already gone. Most people live in fear (fear of illness, fear of economic ruin, fear of dictatorship). But 2020 was for those who focused within a great year, bringing insights and deep understanding. The value of life is not defined by how much power and success one has. Life itself is a great gift and we are divine beings.
We were able to experience the connection we have with everything and how huge our own greatness is. It is up to each one of us how much of it he/she allows.  It was up to each one of us how much inner work he/she did, how many fears he/she laid down. It is not the outer world which defines our reality but who we are inside. The more we have allowed ourselves to die within, the lighter we became in 2020, the more conscious we live our divinity.

Saturn in Aquarius reminds us of our own divinity and of the responsibility we have as divine (co)creators. We create the new reality with the earth and all life on her, and Saturn reminds us to do this consciously. It is critical that we act in alignment with the universal laws, the divine knowledge, the universal divine love, the conscious heart of the creational force, the divine intelligence (or how else you call this energy).

The task is to tear down the old antiquated structures of our reality (power-mania, getting what one wants regardless of the consequences) and to build new structures. These structures do not just have to be great visionary and revolutionary but must be innovative, sustainable and support the Aquarian values. We have to realise and accept that everybody has the freedom (no matter how it looks in the outer world) to determine his/her spiritual evolution as long as this does not harm any other being, including the Earth. The old world has not understood that whatever happens to one being happens to the whole creation. With the focus of Aquarius it is time to realise that the universal love is the most sustainable way to navigate through these unknown times. From the universal perspective love is the answer.

Lilith will raise our awareness when we live the Aquarian energies too one-sided, when we pay too much attention to the technical innovations, the virtual, when we are too detached, and neglect the earthly life. She reminds us that we live in a world which is alive, breathes, hums, sings, is vulnerable and has uncountable values. She awakes our mindfulness towards our and the Earth’s body, that both are not a machine but have their own tempo. Lilith wants equality, a balance between the masculine and the feminine. In Taurus, a female earth sign, with Uranus (god with no body, ruler of Aquarius, a male air sign) she stands up for the balance between progress and life quality, abstract and earthly, technique and nature, detached and sensibly intimate, emotional coldness and warmth.

With death there always comes life. And the dark midnight, the deepest night of the year, is a perfect moment for any turnaround and change. Mythologically, during the most quiet hour of all hours, the Modranecht, the Mothernight, the Earth Mother gives birth to the new light baby, the new sun (resp year) god. It is the moment that light returns, that new life is born. At the winter solstice we can feel the change. Even though darkness still rules we know that new life stirs, germinates, that deep in the Earth new forces gather to break through the soil in spring.

Take time to, openly with no judgement, look at all that limits and denies your true divinity. Be honest and make your decision, a conscious decision, what you want to and will let go. You are responsible for how much freedom and sovereignty your life has. Fin out what you need to be able to love in each moment, no matter how challenging the moment is. What does help you to stay in and be connected with love, no matter what happens in the outside world? Which of your old concepts and believes and habits have to go so that you are free to express your true self, to be it, to live it?
It is you who sets the impulse. Consciously. Aware. With intention. Open your mind for your visions and for the collective consciousness, the new time. Only without our old perceptions we can fully perceive the new. Whatever is coming has never been yet, so we can’t know it, can’t have concepts of and words for it. So let us, like Rilke, not only believe in a new year full of things that have never been but also open ourselves consciously intentionally for it.

One thought on “Epochal Winter Solstice 2020”