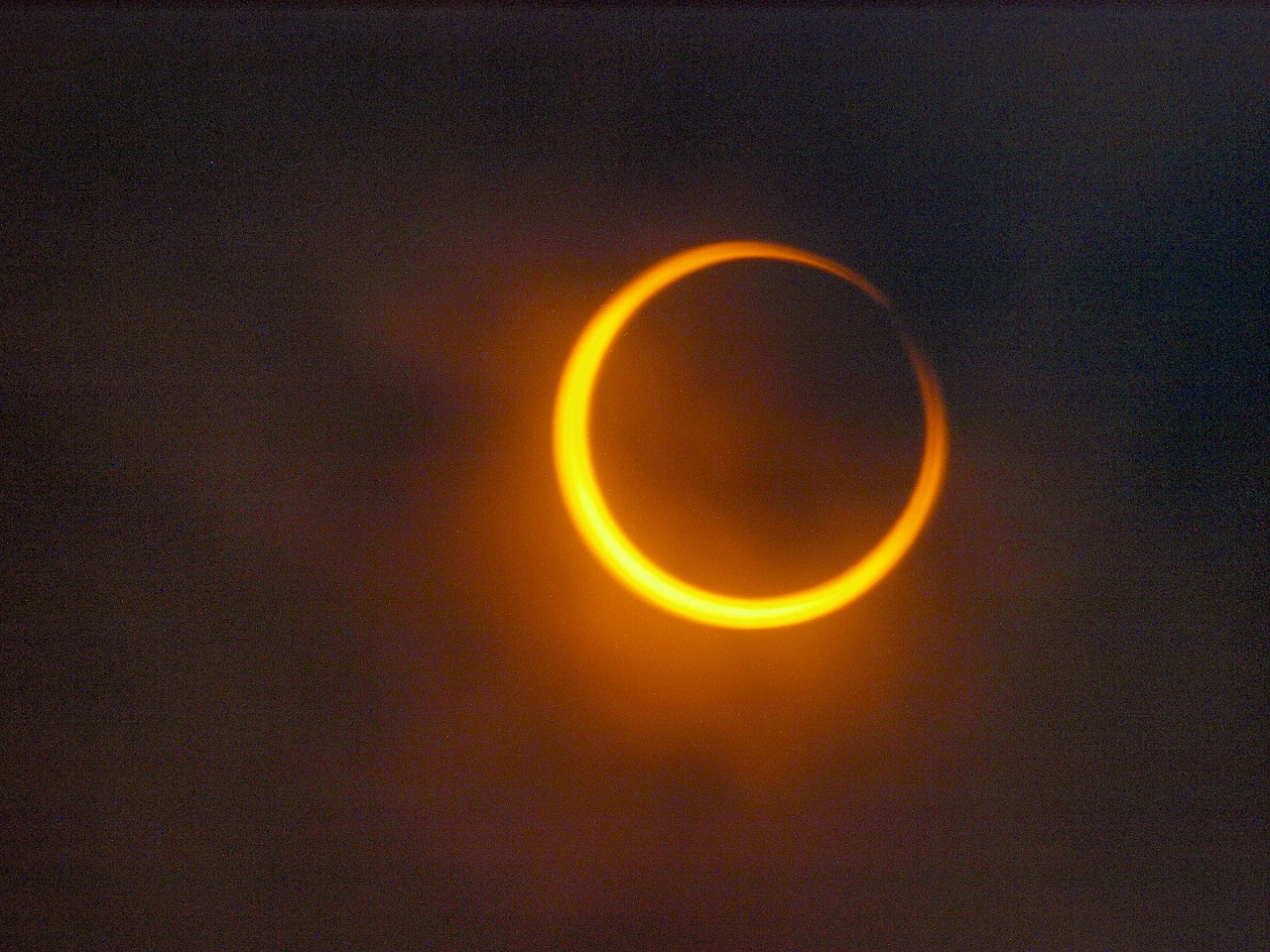 Just a few hours after the summer solstice (20th June, 9.45 pm UT) the middle eclipse of the three that start the new eclipse season (the 1st was the lunar eclipse at the last full moon and we will have a third, another lunar eclipse at the full moon in July) is happening – it is an annular eclipse (0.21 Cancer), which means the Sun and Moon are exactly in line with the Earth, but the apparent size of the Moon is smaller than that of the Sun. Hence the Sun appears as a very bright ring of fire, or annulus, surrounding the dark disk of the Moon.
The ring of fire will be visible in parts of Africa, Southern Pakistan, Northern India, parts of China.

This summer solstice’s ring of  fire is like a huge alchemical fire cauldron, in which all gets burned before something new is born. An annular eclipse alone offers the opportunity of an alchemical change – happening in the middle of the solstice portal makes it much more powerful.

The Sun at the solstice sits at the „moment“ on the galactic cross (that happens every 26,000 years, lasts each time for 72 years). During this time (exact for 3 days, active for 3 weeks) a portal opens through which we can receive energies from other realms and other dimensions of the universe. We can calibrate and raise our frequency with the help of these energies. We can heal physically, emotionally, mentally and spiritually – if we use them. It needs our attention, our awareness, and our intention.

This all happens against the backdrop of a new Pluto-Saturn cycle, which makes clear that we are dealing with fundamental changes of power structures. Power structures that (more and more) become visible – repression because of belonging to a particular ethnic group, sexual abuse of minors, police and administrative arbitrariness, where the ones in power prevail. A rebellion against the repression develops (more and more) as a counterpole.

There is war – depending on camp and orientation things are portrayed in a complete different light. This war can not be won with the head, arguments and physical power. Even though (Mars is in square to the eclipse) those in power will likely continue to use their power (political, economic, social old structure) and let it be felt physically as well.
This war can only be won by using a new path of power – aligning with the mightiest power that exists. That power everyone can only find inside himself, not in any outer structure but in his own heart.

Only 4 days prior to the eclipse Mercury is station retrograde. Another hint that our view has to turn internal. Our mental capacity during the retrograde weeks is strongest when we go within, sort out, understand, analyse, strengthen what we have, meditate and contemplate.

So each of us is asked to dismantle the old power structures and to dive more and more into the very own truthfulness and integrity and to live it. This is work, often painful and uncomfortable. But that is what it‘s about. When we solve the blockages inside of us, negotiations in the external world can happen. When we live internally according to the universal Truth, it can manifest in the outer world – first in my own actions than in the collective.

Saturn/Pluto ask for responsibility, to take responsibility for one‘s own power. To be able to do this one has be to conscious of one’s power first, and also how one has misused it – either by actively misusing the power or by giving the power away.

This eclipse rips away the veil of deception, uncovers deceit and lies and misuse of power. What matters is if we are willing to look at this. Not just in the world politics, the society and economics, etc., but in ourselves.
Usually we can never look directly into the Sun, can never see our true nature, but now, while the Moon darkens the Sun, we can look into the black mirror amid the ring of fire and face our betrayal to ourselves and to others, face our lies to ourselves and to others. We can witness how these burn and change in the alchemical fire cauldron.

Summoning up the courage to use this eclipse portal is worth it: at the end of the alchemical process we have gold, we can recognise our own power, our strength, our uniqueness, our light.
The place of the eclipse is a place of the in-between, the only place of all possibilities and all potential. There we can re-visualise, re-dream, re-create our reality. There all timelines begin. There we inform the mysteries like they inform us.

And so if you have not experienced
This: to die and so to grow
You are only a troubled guest
On this dark earth.
~ Goethe